Below we highlight two classic works that are particularly influential. We also offer a list of provocative articles that show the importance and complexity of trademark genericness.

The economic theory of trademark genericness

Comment: The highly cited, classic work on why we have trademark law and the economic benefits and harms that can flow from it. A revised version appeared in Landes and Posner’s later book: The Economic Structure of Intellectual Property Law (2003, Harvard University Press).

The legal side of trademark genericness

Comment: Chapter 12 covers “Generic Terms” but this treatise contains a wealth of information and legal precedent on all aspects of trademark law in the US. The first edition appeared in the 1970s, so it casts a long shadow. The fifth edition is published by Thomson Reuters. 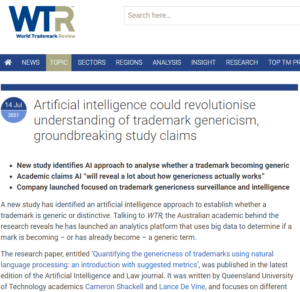